Retired Justice David Souter may have retired from the bench, but he still judges moot court competitions.

The retired Supreme Court justice visited his alma mater Harvard Law School to judge the final round of the Ames Moot Court competition, according to a press release from the school. The release touts that  the competition “stands out for its rigor” in part because of its ability to draw Supremes. (As a side note, this writer also argued before Souter at a moot court competition years ago, across the Charles River from Harvard at Boston University School of Law. So we were fancy too.)

The press release does contain an interesting piece of trivia: as a law student Souter, described as a “wild card” ended up in student health services for injuries he sustained in a casual swordfight.

We can now add to the growing list of things that annoy Justice Antonin G. Scalia.

We already knew Scalia’s not too keen on renowned federal judges criticizing the justice’s work.  He hates it when lawyers arguing before the Supreme Court cite statutes without including the text of the law in their briefs. Accusing the justices of having partisan motives is sure to ruffle Scalia’s feathers as well.

Now, we know that grammatically-challenged flight attendants peeve the Court’s most senior associate justice as well. Speaking this weekend at the Federalist Society, Scalia complained of “the illiterates who communicate with the public” on airlines, according to the WSJ’s Law Blog. Scalia referred to a recent flight where the attendant announced that it was “required that your luggage is under the seat in front of you.” The “is” should have been “be,” according to the justice.

Roberts one of Esquire’s Americans of the year

Glamour isn’t the only magazine handing out year-end accolades to Supreme Court justices. In its December issue, Esquire names Chief Justice John G. Roberts Jr. one of its Americans of the year.

Noting that Roberts’ young age ensures he’ll lead the Court for decades, the chief justice was chosen based mainly on his opinion in the health care challenge.  That opinion, the magazine observed, simultaneously gave full force to the limits of the Commerce Clause while upholding the president’s chief legislative achievement and staving off charges of playing politics.

Roberts “managed simultaneously to save the court’s credibility while also staying faithful to the corporate power to which he has shown deference his entire career,” the magazine notes. “No one saw this coming or had reason to believe that John Roberts was even capable of such nimbleness.”

No Supreme Court fete for Obama

There will be plenty of hubbub during the upcoming inauguration season that will kick off President Barack Obama’s second term. But don’t expect a reception at the U.S. Supreme Court; there will be none.

Unlike in 2008, when Chief Justice John G. Roberts Jr. and the other justices welcomed Obama and Vice President Joe Biden at reception at the Court, no such event will be held in January, the Wall Street Journal’s Law Blog reports.

Not every election results in a Supreme Court fete. Reelected presidents like Obama don’t usually get a second Court welcome. But not all newly-elected president’s do either – just ask former President George W. Bush, who didn’t get one at all (perhaps the justices were wary to do so for appearances sake after the Bush v. Gore decision).

According to Justice Sonia M. Sotomayor, being a princess is not a career.

The justice recently made a trip to Sesame Street – where she’s becoming a frequent visitor – to give career advice to Abby. 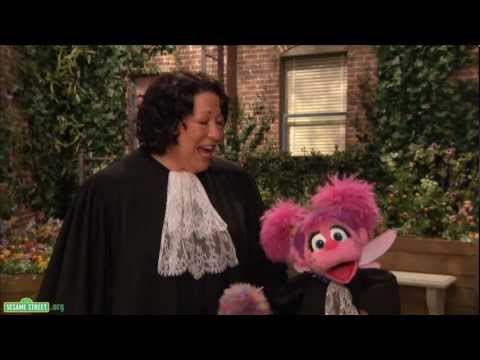 “Okay,” Harrington began. “Well, if you look at §3282, which is the statute of limitations, it says that the crime –”

“That’s not a simple response,” Sotomayor interjected, drawing laughs from the onlookers inside the Supreme Court.

This week Sotomayor landed on the board of our ongoing tally of the term’s Funniest Justice in a big way, earning three laughs and tying Justice Antonin Scalia as the funniest justice of the week. Here are the latest standings:

No wait for Sotomayor

According to DCist [hat tip to How Appealing], voters who – like most in the Washington area and across the country – stood in long queues yesterday to cast their ballots in the U Street neighborhood witnessed the Supreme Court justice being ushered in to do her civic duty without waiting in line. Sotomayor cast her ballot before heading to the Court hear oral arguments in two criminal cases yesterday. (More on those here and here)

As we’ve reported before, Sotomayor bought a home in the popular Northwest Washington neighborhood earlier this year.

You may not expect to see one of the justices of the U.S. Supreme Court in the pages of a glossy fashion magazine. After all, their clothes are usually obscured by those black robes. But Justice Ruth Bader Ginsburg graces the pages of the latest issue of Glamour. And the publication is focused not on the justices’ frocks, but rather her career achievements.

In citing Ginsburg as one of its 2012 Women of the Year, the magazine turned to two of her colleagues to sing her praises. “More than any other person, she can take credit for making the law of this country work for women,” said Justice Elena Kagan, who called Ginsburg “an inspiration.”

The justices will issue orders and hear oral arguments Monday. Check our Supreme Court Report for all the latest news from the Court.

Either the audience this week at the U.S. Supreme Court was tougher than usual, or the Court’s transcriptionist isn’t easily amused, because for the first time since DC Dicta has counted laughs during oral arguments, only one chuckle was earned.

It happened Wednesday when the justices sank their teeth in a pair of cases involving drug-sniffing police dogs. The first involved a dog that detected marijuana smoke through the front door of a house, despite the occupants’ use of mothballs to cover up the odor. The second case involved a dog that signaled a car door for contraband during a traffic stop.

During that case, the defense attorney argued that it could have been the “residual odor” from past presence of drugs.

“But at least we don’t have to worry about mothballs in this case, is that right?” asked Justice Antonin G. Scalia, drawing laughs according to the transcript. “There are no mothballs?”

That one laugh was enough, however, to create a three-way tie for the lead in our Funniest Justice tally. Here are the numbers after three weeks:

O’Connor sat in the courtroom as the Court’s nine sitting justices took up the issue of whether the use of a drug sniffing dog outside of a house is a search for Fourth Amendment purposes. O’Connor frequently drops by her former stomping grounds when she is in Washington.