A lesson for the lawyers over at the U.S. solicitor general’s office: it’s best to be honest and forthcoming about the reason for a change in the government’s position in a Supreme Court case.

A Justice Department attorney learned that lesson the hard way Tuesday when Chief Justice John G. Roberts Jr. upbraided him during oral arguments for an assertion made in the government’s amicus brief. END_OF_DOCUMENT_TOKEN_TO_BE_REPLACED

Roberts one of Esquire’s Americans of the year

Glamour isn’t the only magazine handing out year-end accolades to Supreme Court justices. In its December issue, Esquire names Chief Justice John G. Roberts Jr. one of its Americans of the year.

Noting that Roberts’ young age ensures he’ll lead the Court for decades, the chief justice was chosen based mainly on his opinion in the health care challenge.  That opinion, the magazine observed, simultaneously gave full force to the limits of the Commerce Clause while upholding the president’s chief legislative achievement and staving off charges of playing politics.

Roberts “managed simultaneously to save the court’s credibility while also staying faithful to the corporate power to which he has shown deference his entire career,” the magazine notes. “No one saw this coming or had reason to believe that John Roberts was even capable of such nimbleness.”

“Is being able to see through walls a violation of search and seizure protections? I think it will be a good opportunity to see how prescient the framers were if the Constitution will be able to deal with these questions,” Roberts said during remarks at the school, the Houston Chronicle reports. “What is the fundamental protection offered by the Constitution when applied to new technology and situations? It’s a question that comes along all the time.”

Earlier this year, the Court held that police’s warrantless installation of a GPS device on a suspect’s car violated the Fourth Amendment, and since then other courts as well as lawmakers have struggled to delineate the parameters of that ruling.

During Monday’s oral arguments in Elgin v. U.S. Dept. of the Treasury, petitioner’s counsel made the point that some federal employees have no right to bring constitutional employment claims before the Merit Systems Protection Board, such as summer interns.

That comment was one of six the chief justice earned this week, making him the week’s Funniest Justice. Justices Antonin Scalia and Stephen Breyer were right on his heels, with five laughs apiece. Here are the standings for the term so far:

Happy birthday to the chief

Pleasantries in the Chief Justice’s absence

Yesterday was an unusual day at the U.S. Supreme Court. During yesterday’s oral arguments in the case Credit Suisse Securities v. Simmonds, Chief Justice John G. Roberts did not participate. That left Justice Antonin Scalia, the Court’s most senior associate, in charge of things.

Jeffrey B. Wall, assistant to the solicitor general, had the unusual task of arguing as amicus in support of neither party – instead offering an alternative approach to the Court in the securities case. At the end of Wall’s argument, he also offered an atypical coda on the government’s behalf:

“We’ve occupied the reasonable middle ground. Hope you like it.”

As the audience and the justices laughed, Scalia replied: “Thank you, Mr. Wall. That’s a nice note on which to end.”

The Funniest Justice, week 1: Hail to the Chief comic

During oral arguments in the case Maples v. Thomas, attorney John C. Neiman, Jr., sought to explain why a state’s attorney sent a notice to a defendant – as opposed to his lawyer – that his time to file a petition for relief had expired.

“At that point in time, the State case was over,” Neiman siad. “So, it was hardly clear if [the prosecutor] was going to do something that he didn’t have to do under the rules.”

“Why did he do it, then?” asked Chief Justice John G. Roberts. “Just gloating that the fellow had lost?”

That remark earned the chief justice one of the three laughs he drew during this term’s first week of oral arguments, putting him in the lead of our first weekly tally of The Funniest Justice. The ever comedic Justices Antonin Scalia and Stephen Breyer were right behind him with two laughs apiece, and Justice Elena Kagan also drew chuckles from the audience once.

Here are the week 1 standings:

Roberts noted that Scalia was confirmed on Sept. 26, 1986, and that he heard his first oral argument “on the first Monday in October, 25 years ago.”

“The place has not been the same since,” Roberts said, drawing laughs from the audience as well as from the justices – Scalia included.

Just because his colleague Justice Stephen Breyer likes to get some of his information from “the Tweeter,” as he calls it, don’t expect Chief Justice John G. Roberts to follow suit.

Speaking recently at the 4th Circuit Court of Appeals Annual Conference, Roberts said he does not “Tweet, whatever that is.”

But, he said, the proliferation of social media and other technologies has changed the U.S. Supreme Court in many ways – from the substantive legal issues they present, to rules that the justices must set for their law clerks. One of those rules: no Tweeting about the job.

“I sit down with incoming clerks at the beginning of the year,  as soon as we get back,” Roberts explained to the audience in remarks that were televised on C-SPAN, “ and go through a number of things they have to be aware of, and that’s one of them. It’s new. I tell them that they obviously shouldn’t be tweeting about what they’re doing, whether they have websites or whatever.”

Though Roberts clearly is not at ease with the lingo of the web, he said he certainly understands that seemingly harmless Internet chatter could tip off the public about opinions before they are released.

“A lot of it is inadvertent,” Roberts said. “They kind of think ‘well, I’m working really hard on this opinion this week, or getting ready for an argument.’ And you know, discerning people can look at that they are saying and try to put two and two together and figure out, maybe, what their boss is doing and all that. So even unintentionally they can sometimes reveal confidences. And, of course that’s very dangerous. So I advise them to just put all that on hold.”

But the justices must deal with social media on the job, Roberts said.

“The impact of new technology on substantive law is really quite significant,” Roberts said.  “[So] it’s going to be a great challenge … for many of us to try to keep up with the new technology. It’s one of the great things, again, with the law clerks. They come in and they know how all this stuff works and what it means. They are a resource for educating those of us that are behind the  curve.” 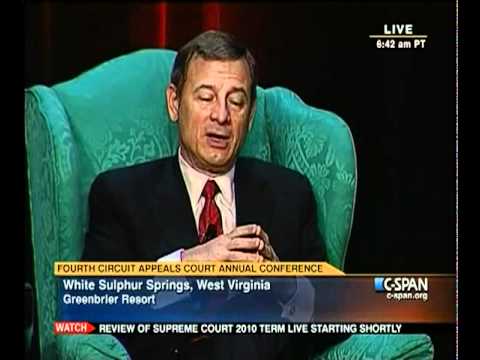 Supreme Court bench hotter than ever

Supreme Court practitioners have many challenges – crafting complex legal arguments advocating for their clients, dealing with adverse precedent, and commanding a large body of legal research, to name a few. But once they approach the podium for oral arguments, the biggest challenge may be simply getting a word in edgewise.

That’s because the high court’s bench is hotter than ever, with the Court’s newest additions – Justices Sonia Sotomayor and Elena Kagan – proving to be much more vocal than their predecessors, the Washington Post’s Robert Barnes reports.

Justice Clarence Thomas may opt out of engaging in oral arguments, but his colleagues seem to more than make up for it. Supreme Court practitioner Carter Phillips said that, according to Justice Samuel Alito, the court averaged more than 70 questions per half-hour last term. That works out to 2.3 questions per minute – a rapid-fire pace.

As a result, Chief Justice John G. Roberts is often tasked with being a traffic cop of sorts, Barnes wrote. When two justices ask a question at the same time, it is Roberts who usually gives a nod deciding who will speak, and sets up a virtual queue of who is to speak next. He also sometimes gives attorneys a break from the rapid questioning, allowing them some time to actually answer them.

Supreme Court litigator David Frederick said Roberts’ experience arguing before the Court makes him particularly adroit at that task. “The chief justice has a sense of what it’s like to be on this side of the bench,” Frederick said. “He totally understands an advocate’s perspective.”