After the law firm King & Spalding decided to withdraw from representing House Republicans’ defense of the Defense of Marriage Act, lead attorney and former Solicitor General Paul Clement resigned from the firm in protest – and quickly vowed to continue the defense of the law with the boutique firm Bancroft PLLC.

The move came in a shocking turn of events this morning, which started with the announcement from King & Spalding that it would seek to withdraw as counsel in charge of defending the law, which denies federal benefits to gay married couples.  The firm’s chairman, Robert Hays Jr., said the decision was due to the firm’s “inadequate” vetting of its involvement in the litigation, according to the National Law Journal‘s BLT blog. Gay rights groups have recently criticized the firm for taking up the defense of the law after the Obama administration announced earlier this year that it would no long defend the statute against challenges in federal court.

Clement protested by resigning from the firm, which he joined back in 2008 after leaving the solicitor general’s office. In his letter of resignation, posted by the blog How Appealing, Clement said he decided to leave the firm immediately “not because of strongly held views about this statute.”

“Instead, I resign out of the firmly-held belief that a representation should not be abandoned because the client’s position is extremely unpopular in certain quarters,” Clement wrote. “Defending unpopular positions is what lawyers do. The adversary system of justice depends on it, especially in cases where the passions run high.”

Soon after, Bankroft released a statement announcing Clement as the firm’s newest partner. The announcement, which touts Clement’s background as a veteran Supreme Court advocate, mentions neither his work at King & Spalding nor his representation in the DOMA case.

The U.S. Supreme Court has blocked broadcast of the same-sex marriage trial in California on a procedural technicality.

In a 5-4 ruling issued Wednesday evening, the Court declined to rule on the merits of “whether such trials should be broadcast.” Instead, the unsigned opinion states, “the broadcast in this case should be stayed because it appears the courts below did not follow the appropriate procedures set forth in federal law before changing their rules to allow such broadcasting.”

The Court held that the district court failed to follow proper procedures when it amended its local rules in order to allow the trial to be broadcast, and failed to give sufficient time for notice and comment on the rule change. Coverage of the trial was to be aired on the video sharing site YouTube.com.

The Court, acknowledging that the issue of cameras in the courtroom is a hot topic, took a pass on addressing that issue. “We do not here express any views on the propriety of broadcasting court proceedings generally,” the opinion stated. “Instead, our review is confined to a narrow legal issue: whether the District Court’s amendment of its local rules to broadcast this trial complied with federal law. We conclude that it likely did not and that applicants have demonstrated that irreparable harm would likely result from the District Court’s actions.”

Then Breyer questioned why the High Court was involved in the first place.

“This legal question is not the kind of legal question that this Court would normally grant certiorari to consider,” Breyer wrote. “There is no conflict among the state or federal courts regarding the procedures by which a district court changes its local rules.”

As to the issue of irreparable harm, Breyer wrote: “the witnesses, although capable of doing so, have not asked this Court to set aside the District Court’s order. And that is not surprising. All of the witnesses supporting the applicants are already publicly identified with their cause. They are all experts or advocates who have either already appeared on television or Internet broadcasts, already toured the State advocating a ‘yes’ vote on Proposition 8, or already engaged in extensive public commentary far more likely to make them well known.”

The full opinion in the case Hollingsworth v. Perry can be read here.

A California judge had ruled to allow video from the proceedings to be broadcast replayed on the video website. But opponents of same-sex marriage asked the U.S. Supreme Court to block such broadcasts, saying it would result in witness harassment and intimidation.

In the brief order, the Court stated it needed more time to fully consider the issues, and blocked the broadcast of video feeds in a stay order that lasts until Wednesday afternoon.

Justice Stephen Breyer dissented from the order, saying he agreed that the Court needed more time and was pleased that the stay was short, but added that the standards for awarding such a stay had not been met in his opinion. Breyer noted that the stay prevented video of the proceedings to be streamed to other courthouses as well.

A federal challenge to a ban on gay marriage – designed to go all the way to the U.S. Supreme Court – will go to trial in California in January.

Yesterday, a judge set a Jan. 11 trial date in the lawsuit launched in May by power attorneys Ted Olson and David Boies challenging California’s Proposition 8. U.S. District Judge Vaughn Walker said the expedited trial schedule was set because the case is “a matter of huge importance for the people of this state.”

The judge denied the requests of several gay rights organizations seeking to join the case as co-plaintiffs. Olson and Boies had opposed the request of the groups, which had initially opposed the lawsuit for fear that a loss would set a negative precedent that would be applied nationwide.

Olson, a staunch conservative and Federalist Society leader who served in the Justice Department under Presidents Reagan and Bush, explained in a New York Times piece yesterday why he chose to take on the battle. He said it was a civil rights issue. California’s gay marriage ban, he said, creates three classes: straight couples who can marry, same-sex couples who were allowed to marry for the brief time it was legal in the state, and other same-sex couples for whom marriage is not allowed.

“This case could involve the rights and happiness and equal treatment of millions of people,” Olson said.

Earlier this year, Rep. Barney Frank famously said it was not the time to take the issue of gay marriage to the Supreme Court (Something about Justice Antonin Scalia being on the Court).

Yesterday, veteran Supreme Court litigator Ted Olson, the staunch conservative who successfully argued Bush v. Gore in 2000, which decided the presidential election, said it is time for the Supreme Court to weigh the issue. And he wants to take it there – and win.

Olson has paired with his former Bush v. Gore rival David Boies to file a federal lawsuit challenging the constitutionality of Proposition 8 in California, which bans gay marriage. During a press conference in Los Angeles Yesterday, Olson was asked why a right-leaning, Federalist Society member like himself was fighting for gay marriage. “I didn’t know you were pro-gay,” one questioner said.

“I don’t think I’ve ever been part of any organization that was anti-gay or felt that a group was not entitled to equal rights,” Olson replied, saying that he believed the case was about equal rights guaranteed for every American. “I hope that people don’t suspect my motives.”

Olson said he would like the case to go all the way to the Supreme Court, and that he intends on winning. “David and I have both studied constitutional law. We’ve both practiced law longer than we’d rather admit,” Olson said, glancing over at a chuckling Boies. “We think we know what we are doing. [W]e’ve studied the United States Supreme Court.”

But the Associated Press reports that gay rights activists are not as anxious to take the issue to the Supreme Court now. A loss, they fear, would take away marriage rights for gays and lesbians in states that currently grant them. 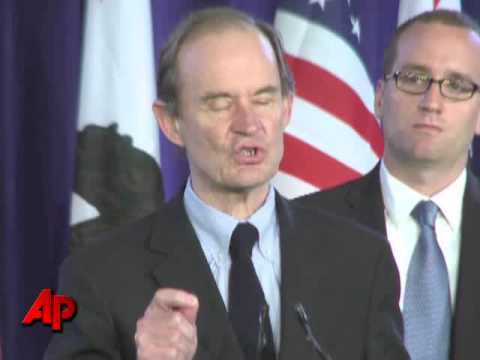 Supreme Court Justice Antonin Scalia loves talking about the Constitution. He’s not afraid to discuss hot-button topics like the death penalty and gay marriage. But apparently, he’s not a big fan of getting his picture taken.

Yesterday, during a speech at William Carey University in Mississippi, Scalia was busy talking about constitutional originalism while a media photographer, who was authorized to take still shots of the justice, was snapping away. Still, Scalia was displeased.

“Could we stop the photos please?” Scalia said, according to a report by The Hattiesburg American.

Interestingly, the last time Scalia spoke in Hattiesburg was in 2004, when a free speech battle was spurred after a federal marshal seized the tape recorders of reporters from the American and the Associated Press covering Scalia’s talk. The news organizations sued the U.S. Marshals Service and won, and Scalia later apologized to the reporters and they got their tape recorders back.

Yesterday during Scalia’s talk, he touched on the issue of gay marriage just over a week after Rep. Barney Frank made headlines for calling the justice a “homophobe.” Although Scalia declined to comment on Frank’s comments at the time, yesterday Scalia said that the Fourteenth Amendment does not provide a right for gays to marry any more than it provided a right for women to vote. It is for legislators to carve out any such right, Scalia said – just as they did by passing the 19th amendment guaranteeing women’s suffrage.

He acknowledged that not all Supreme Court justices share his views.

“There are four justices who have sat beside me who believe that the death penalty is now unconstitutional … and they believe it to be unconstitutional, because they think it ought to be,” he said. No word yet on whether the ears of Justices Ginsburg, Stevens, Souter or Breyer began to burn.

Frank: Scalia is a ‘homophobe’

Frank, who is gay, was interviewed by the news website 365gay.com. In the video interview, available on the website, Frank was asked about of the Defense of Marriage Act, the 1996 law that prevents the federal government from recognizing gay marriages and gives states the right not to recognize gay marriages even if legal in another state. Frank said the only way to end the law would be through a constitutional challenge before the nation’s highest court.

“I do think that [the] argument that it is unconstitutional for the federal government to pick and choose as to which marriages it will accept is a good one,” Frank said. “At some point it’s got to go to the United States Supreme Court.

“I wouldn’t want it to go to the United States Supreme Court now,” Frank added, “because that homophobe Antonin Scalia has got too many votes on this current Court.”

According to he Associated Press, Scalia declined to comment to Frank’s remark Monday.

Frank: Scalia is a ‘homophobe’

Frank, who is gay, was interviewed by the news website 365gay.com. In the video interview, available on the website, Frank was asked about of the Defense of Marriage Act, the 1996 law that prevents the federal government from recognizing gay marriages and gives states the right not to recognize gay marriages even if legal in another state. Frank said the only way to end the law would be through a constitutional challenge before the nation’s highest court.

“I do think that [the] argument that it is unconstitutional for the federal government to pick and choose as to which marriages it will accept is a good one,” Frank said. “At some point it’s got to go to the United States Supreme Court.

“I wouldn’t want it to go to the United States Supreme Court now,” Frank added, “because that homophobe Antonin Scalia has got too many votes on this current Court.”

According to he Associated Press, Scalia declined to comment to Frank’s remark Monday.