Next Supreme Court health care law challenge could be on deck

The 4th Circuit upheld the Patient Protection and Affordable Care Act’s employer mandate, a move that sets the stage for the high court to take up the constitutional challenge to the provision, requiring employers to provide health care coverage to employees or pay a penalty, as soon as next term.

The circuit court had previously dismissed the case Liberty University v. Lew on procedural grounds, finding that it lacked jurisdiction to take up the matter under the Anti-Injunction Act. But after the Supreme Court rejected the AIA argument  it its landmark health care law ruling last year, the 4th Circuit revived the case and ruled on the constitutional challenge.

More here from our sister publication The Daily Record, and from the Lawyers USA archive.

Reading hundreds and hundreds of pages of casebook  Supreme Court  opinions usually makes law students’ eyes glaze over. But one student read the dramatic written legal interplay between Justice Antonin G. Scalia and Justice Ruth Bader Ginsburg, and it was music to his ears.

For Derrick Wang, a recent Maryland’s Carey School of Law grad and a musician, it all started with a dissent by Scalia.

“I realized this is the most dramatic thing I’ve ever read in law school … and I started to hear music — a rage aria about the Constitution,” Wang told NPR’s Nina Toenberg. “And then, in the midst of this roiling rhetoric, counterpoint, as Justice Ginsburg’s words appeared to me — a beacon of

lyricism with a steely strength and a fervent conviction all their own. And I said to myself, ‘This is an opera.’ ”

That opera, called “Scalia/Ginsburg,” (which Ginsburg revealed in May was in the works) is now complete and will debut in the fall at the University of Maryland, and will be presented next spring at the Washington National Opera. The justices themselves got a sneak preview from Wang last month after the court issued its final decisions of the term.

Roberts: Bench a little too hot during oral arguments

Justice Clarence Thomas has already expressed his opinion that the Supreme Court bench is a little too hot, with justices jumping all over each other to grill the attorneys that appear before them. Now, the chief justice has echoed Thomas’ sentiment.

Chief Justice John G. Roberts Jr. said the justices “overdo it a bit” with their questions during oral arguments, the AP reports.

We know what Justice Samuel A. Alito Jr. has been known not to hide his feelings. But does he mock his colleagues on the bench?

That is the assessment of the Washington Post’s Dana Milbank, who wrote that the justice let his body language do the talking during the court’s recent opinion announcements.

When Justice Ruth Bader Ginsburg was reading from a dissent, Alito “shook his head from side to side in disagreement, rolled his eyes and looked at the ceiling,” Milbank wrote. During an opinion announcement from Justice Elena Kagan a few days earlier, Alito “glowered” and the newest justice made a joke. And when Justice Sonia M. Sotomayor made a quip during one of her opinions, “Alito rolled his eyes and shook his head,” according to the writer.

Alito sometimes saves expresses his disapproval in the written word as well. The National Law Journal’s Tony Mauro points out that Alito was not very keen on an analogy Kagan made involving the game Clue in an opinion, and he wrote so. And he even critiqued the oral argument answers of then Justice Department attorney, and now D.C. Circuit Judge, Sri Srinivasan in an opinion handed down Monday, as Josh Blackman noted on his blog.

The justices of the U.S. Supreme Court may take a little time in between handing down a string of blockbuster rulings this week  — on same-sex marriage, voting rights, affirmative action, workplace harassment and genetic drug liability, just to name a few — to have some cake and

Busy Monday at the SCOTUS

We’re still awaiting decisions in the most talked-about cases of the Supreme Court’s term — those dealing with affirmative action policies, §5 of the Voting Rights Act and same-sex marriage — but the justices were busy at work yesterday handing down a host of other major rulings.

Among the court’s actions Monday: striking down an Arizona law requiring proof of citizenship to register to vote in federal elections, a ruling limiting Miranda’s reach before a witness is arrested, and a decision that certain facts that could boost a mandatory minimum sentence must be found by a jury, not a judge.

Check out our DC news page for all the latest activity from the Court. 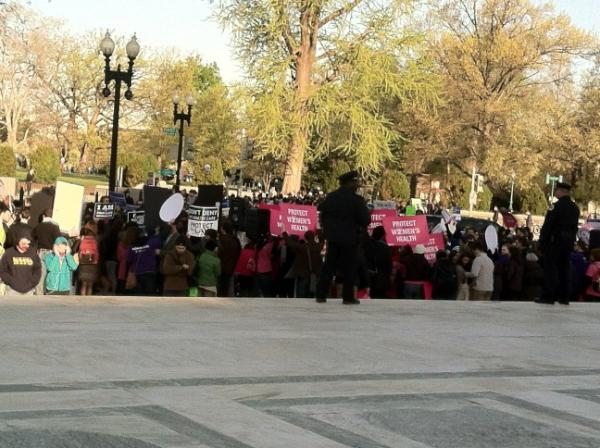 Days after a district court struck down a federal law barring speeches, protests and other demonstrations on U.S. Supreme Court property, the court has made a move of its own to ensure that protestors remain on the public sidewalk rather than on the courthouse steps.

Those who have visited the Supreme Court building — particularly on days the justices hear controversial cases like the health care law challenge or the disputes over same-sex marriage laws — know that demonstrators are barred from the court’s large outdoor plaza leading up the door. For more than a half century, federal law has prohibited “processions or assemblages”  on the court’s marbled piazza, and police regularly direct protesters to remain on the sidewalk in front of the courthouse. (DC Dicta snapped the above photo the day the health care challenge was heard.)

But Tuesday, D.C. District Judge Beryl A. Howell held that the federal law violates the First Amendment. “It cannot possibly be consistent with the First Amendment for the government to so broadly prohibit expression in virtually any form in front of a courthouse, even the Supreme Court,” Howell wrote in the opinion, as a the Washington Post reported.

But don’t expect to see marches on the court’s plaza any time soon. Thursday the court issued a new regulation largely reintegrating the restrictions imposed by the law, which was posted on the court’s website:

“No person shall engage in a demonstration within the Supreme Court building and grounds.  The term ‘demonstration’ includes demonstrations, picketing, speechmaking, marching, holding vigils or religious services and all other like forms of conduct that involve the communication or expression of views or grievances, engaged in by one or more persons, the conduct of which is reasonably likely to draw a crowd or onlookers.  The term does not include casual use by visitors or tourists that is not reasonably likely to attract a crowd or onlookers.”

The regulation was imposed to “maintain suitable order and decorum within the Supreme Court building and grounds,” and was approved by Chief Justice John G. Roberts Jr., according to the New York Times.

It is unclear whether the district court’s ruling would apply to the rule, or if the judge’s ruling will be appealed.

While most Supreme Court justices are known to be private, even reclusive in some cases, Justice Sonia M. Sotomayor is taking a different path. Since coming to Washington in 2009, Sotomayor has become “the hippest member of the bench,” according to the Washingtonian.

The magazine points to several bits of evidence that the justice has gone from Sonia from the Bronx to the belle of the District:

Instead of settling in the suburbs of D.C. or the solitude of the Watergate in Washington like some of her colleagues, Sotomayor rented a pad in Cleveland Park before buying a condo in the U Street corridor – one of city’s hippest neighborhoods. (A DC Dicta spy recently spotted the court’s first Latina justice strolling along 14th Street, sans entourage.)

In her free time she’s been seen salsa dancing or partying with chef José Andrés at his Penn Quarter eatery Jaleo. She hangs with the likes of Eva Longoria, J.Lo and Oprah. She’s a hit with the kids, appearing on Sesame Street twice. Vice President Joe Biden even rearranged his own schedule so that Sotomayor could fit his swearing-in ceremony around her book-signing appearances.

“She’s breaking the mold and lighting it on fire,” SCOTUSblog’s Tom Goldstein told the magazine.

The weather is warm, barbecue grills have already been fired up, and schools are recessing for summer. Which means it’s the time of year to start watching the U.S. Supreme Court to see what Justice Anthony M. Kennedy will do.

Not only do the justices tend to save the biggest decisions for the final weeks before the court’s term wraps at the end of June, most of those rulings divide the justices — often 5-4. This year, we are expecting blockbuster rulings on issues including same-sex marriage, affirmative action, voting rights, DNA evidence collection and human gene patentability, and Kennedy — known as the court’s swing voter — may once again be the ultimate decider.

So what will he do? Only the justices know for sure at this point, but Time Magazine’s Massimo Calabresi pointed out that Kennedy has demonstrated in the past that he “likes to be on the right side of history.”

But, he said, “[a]s court watchers learn every June, however, it’s futile to try and guess how Kennedy will come down.”

Heard in Ginsburg’s chambers: “I do”

Though the justices of the U.S. Supreme Court are quite busy during the late spring months drafting the last opinions of the term, Justice Ruth Bader Ginsburg took a little time out to conduct another ceremony this weekend.

The justice served as wedding officiant to Morgan Deann Ortagus and Jonathan Ross Weinberger, who tied the knot in the justice’s chambers at the Supreme Court Saturday, according to the New York Times. More here.