Within minutes of the conclusion of President Barack Obama’s first State of the Union address Wednesday night, the internet was already abuzz over what Justice Samuel Alito did as the president criticized last week’s Supreme Court campaign finance ruling.

Before the packed House chamber – which included six of the nine justices of the nation’s highest court – Obama, blasted the Citizens United v. FEC decision and urged Congress to move to reverse it.

“With all due deference to separation of powers, last week the Supreme Court reversed a century of law to open the floodgates for special interests – including foreign corporations – to spend without limit in our elections,” Obama said, as Chief Justice John G. Roberts, Jr. and Justices Anthony Kennedy, Ruth Bader Ginsburg, Stephen Breyer, Alito and Sonia Sotomayor sat in the front two rows, just feet away from the president. “Well, I don’t think American elections should be bankrolled by America’s most powerful interests, or worse, by foreign entities. They should be decided by the American people, and that’s why I’m urging Democrats and Republicans to pass a bill that helps to right this wrong.”

Normal protocol calls for Supreme Court justices in attendance at State of the Union addresses to remain silent, even when members of Congress erupt in cheers, boos or other reactions.

But as soon as Obama uttered the words “special interests,” Alito – who joined the opinion’s 5-4 majority – seemed to break that tradition. The justice furrowed his brow, shook his head, and seemed to mouth the words: “not true.”

That gesture wasn’t exactly a Rep. Joe Wilson-esque “You lie!” moment, but the reaction by bloggers, tweeters and online news and commentary sites was almost immediate. (“Oh, snap! Did Alito just heckle Obama?!” chirped one comment that popped up on my computer screen as I watched the address.)

UPDATE: And TPM has the video: 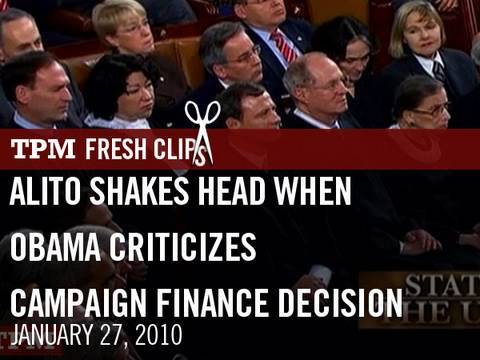